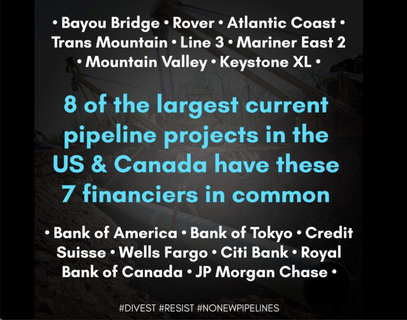 Wells Fargo has been in the headlines since 2015 over a scandal involving bank employees creating fake accounts in customers' names to bolster performance results and boost bonuses. While other banks are also involved in the pipeline deals, Wells Fargo's recent history puts it at the top of our list.

In addition to complaints about the pipeline and its business practices, Wells Fargo was hit with a lawsuit at the end of January that accused the bank of illegally denying student loans to young immigrants who are protected from deportation and allowed to work and study in the U.S. under a program created by former President Barack Obama.

It’s also worth noting that Wells Fargo is one of the six primary financiers of the for-profit private prison industry.

The City of Richmond's primary contract for Commercial Banking Services is with Wells Fargo. They also have Deposit and Trust accounts with SunTrust, Bank of America and US Bank, as well as loan/bond agreements with many banks including Wells Fargo, Bank of America, SunTrust, BB&T, US Bank, PNC Bank, TD Bank, and Capital One. It would be difficult to put a specific percentage on “who they bank with” as deposit and loan balances ebb and flow throughout the year. However, the Wells Fargo contract for Commercial Banking Services is dated 10/22/2014 and runs through October 2019. Because of it’s history, and the timing of their contract, we’ve identified Wells Fargo as the top bank on our Divest RVA list.

Climate science clearly demands we keep carbon and methane in the ground and invest in clean, renewable energy. Last October, the Intergovernmental Panel on Climate Change (IPCC) released a sobering report on the devastating impacts our world will face with 1.5° Celsius of warming, while setting out the emissions trajectory the nations of the world need to take if we are to have any chance of keeping to that 1.5°C limit.

Yet banks have continued to finance fossil fuel projects with $1.9 trillion over the past three years, after the Paris Agreement was adopted. In Virginia, Bank of America still leads the pack together with JPMorgan Chase, Wells Fargo, PNC, SunTrust, and U.S. Bank. Fracked oil and gas financing is also on the rise over the past three years, and Wells Fargo and JPMorgan Chase are the biggest bankers of fracking overall. In particular, they support key companies active in the Permian Basin, the epicenter of a climate-threatening global surge of oil and gas production.

The fossil fuel industry has been repeatedly linked to human rights abuses, including violations of the rights of Indigenous peoples and at-risk communities, and continues to face an ever-growing onslaught of lawsuits, resistance, delays, and political uncertainty. As fossil fuel companies are increasingly held accountable for their contributions to climate change, finance for these companies also poses a growing liability risk for banks.